If you knew Robin “Shippy” Shipman it wouldn’t surprise you that his liver gave out. He gave it as good a workout as a guy could and he went down with guns a blazin’…yee haw. He was one of a kind, a true Montana original. They don’t make them like Shippy anymore and they wore out all the machinery trying to figure out how. We had plenty of fun way back when elk hunting wasn’t drawing sell-out crowds…before the Bear Creek parking lot got overrun with Bozeman license plates…before the wolves took over. Shippy was, among other things, a horseman, a packer, a joker, a neighbor and a friend that would give you the down vest off his back if he could. He had a camp up the North Fork of Bear Creek for years. It was plush…a large wall tent with a floor…a cook tent…propane heaters, tables, goosedown bags, whiskey and always some cold Oly Pop in the creek.

“Ya’ll just drop in there and use it whenever you want…spend the night if you get worn out…stay a few days. There’s some canned goods in there…help yourself…creamed corn better than sex.”

I took the photos above at the top of the Madison/Gallatin Divide coming up out of Muddy Basin in November, 1992. For some unknown reason I thought it would be real cool to shoot an elk way down there…I mean WAY down there. I was on foot…I hiked in there early that Election Day after I voted for whoever it was that lost the election. I shot the bull late in the day…I hiked out in the dark…maybe Shippy could pack it out for me? He could and he did. In the photo you see a mule…not just any mule…that’s Jiggy mule…”Jig Honey”…if Shippy had Jiggy lined out you knew we were going to get home just fine. That’s Pioneer Mountain in the background before Tim Blixeth carved it up and Oprah moved in. 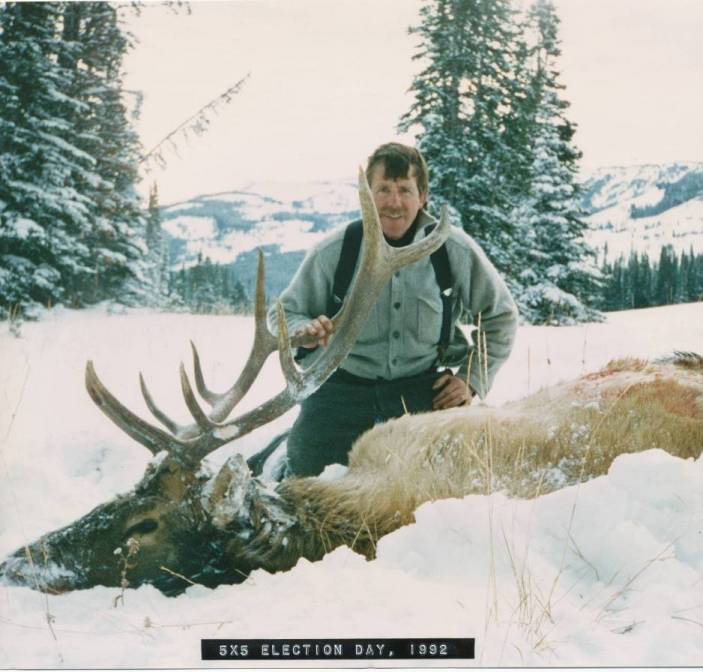 Shippy never had a problem sharing with others. His heart was as big as his barn. He was a giver…he was my neighbor…he was my friend. RIP Robin Shipman…you were one of a kind.