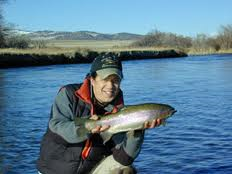 “The water level on the upper is and has been stable for over a week now. 776 cfs out of Hebgen which translates to just under 1000 at Varney. This is lower than the long-term median average but not a bad level all things considered. Speaking of this…there may be some very positive changes in the works starting as early as this fall/winter. PP&L has recently indicated that they are considering some in-house changes to their Madison River management policies. In essence they will be looking at running the flows in a completely different and reactive way as has been been discussed here (and elsewhere). Their plan, apparently, is to run the flow out of Hebgen at the current rate (or close to it) all winter and keep most of the water in the reservoir instead of drawing it down as has been their practice. They will then react to real-time, on the ground conditions of snowpack and water content. They are talking about doing away with the 10% flow increase rule for the spring months and potentially upping the maximum over-Quake flow rate to 4000 cfs or a hair higher if possible. In essence they’re considering running the flows here more like a “real” undammed river would operate…moderate and stable over-winter flow and higher, runoff-like flows in the spring. The light bulbs seem to be flickering to life…Hallelujah! We’re not holding our collective breaths yet but it’s definitely a very good sign. Believe it or not (and some folks continue to choose not to believe it) this could be HUGE for this river and this fishery. If they actually make these changes and once they get the dam fixed (a whole other point of contention here) yearly spring flushing flows, cooler water temps and potentially higher flows here through most summers could mean some dramatic changes in the health and numbers of not only fish but fish food as well. We’ll be keeping a very close ear to this.”

Shouldn’t we be getting this kind of seriously vital input from the Madison River Foundation instead of a local boat rower? Isn’t that the core reason for the existence of the Foundation?  To Preserve, Protect and Enhance? THE HEBGEN DAM IS FAR AND AWAY THE SINGLE MOST CRITICAL FACTOR FOR THE HEALTH OF THE UPPER MADISON RIVER AND ITS TROUT. Nothing else is a close second.

Why doesn’t the Foundation have someone like Lum agressively posting river info on a daily or weekly basis, especially during the important summer fishing season? Oops, I forgot…they did have that person on their board…his name was Mike Lum and he resigned. Why?

You can follow Mike Lum’s comments in the River Reports section of the Madison River Fishing Company’s website: