Happy fifth year anniversary to Pennsylvania Power and Light. It was five year ago today, August 30, 2008,  that your Hebgen Dam stop logs busted up sending a 4000 cfs wall of water down the Madison River that resembled the Banzai Pipline. 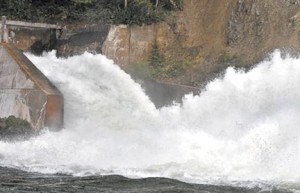 A lot has happened in the last five years:

Osama Bin Laden was snuffed out.

The Iraq War came to an end.

I-phones and I-pads have become a way of life for millions.

A lot has happened…but fixing the Hebgen Dam isn’t one of them.

The flows have pinballed…the water temps have risen…there have been talks, meetings, press releases, newletters, texts, tweets, photo-ops, emails, proclamations, promises…next year, next year, next year…but next year never comes…the dam is still broken. The Hebgen Dam has become like the old Brooklyn Dodgers…”Dem Bums”…”we’ll beat the Yankees…wait til next year.”

The old grandpa brown trout in the Madison is telling his kids and grandkids, “hang in there chillins, help is on the way.”

And mama rainbow in the riffle is keeping the family cool and in the shade for as long as she can hold out.

And there is a very small group of Rocky Mountain Whitefish that still remember “The Great Flood of ’08”.

With the water temperatures in the Madison rising every year, how long will it be before “next year” is too late? A lot is riding on this one, PP&L. Let’s make this anniversary the last one.

Generations are depending on you.